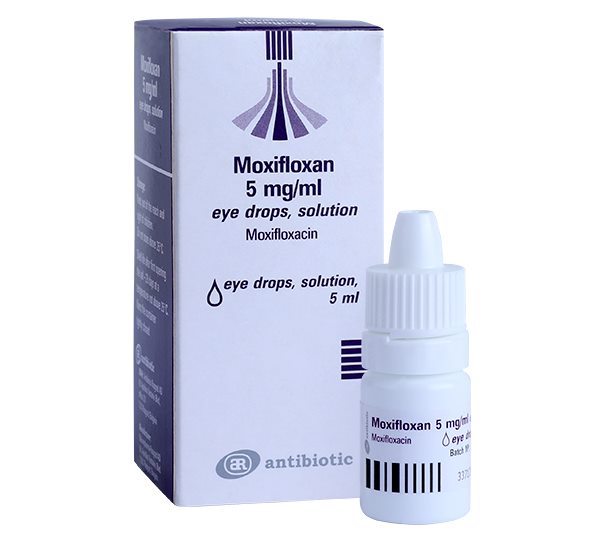 The mechanism of action

Moxifloxacin is the 4th generation fluoroquinolone. Like other fluoroquinolones, it stops the duplication of bacterial DNA, as well as suppresses the production of recombinant DNA gyrase and topoisomerase IV.

The eye drops of Moxifloxacin is absorbed moderately. In inpatient facility with a regimen for two eyes three times a day the maximal concentration of the medication (Cmax) is 2.7 ng / ml and AUC is 41.9 ng, respectively after four days of use. These values were 1600 and 1200 times lower than the orally administered therapeutic dose of moxifloxacin (400 mg).

The modes of administration and doses

It is administrated only locally. It is not assigned to the elderly, those over 65 years old. Not intended for injection. The solution should not be injected subcutaneously or directly into the anterior chamber of the eye.

The dosage: three times daily, one drop in each eye. Usually the infection passes within 5 days. The duration of the treatment depends on the degree, course, clinical and bacteriological condition of the infection.

In pediatrics it is used in the same doses and modes.

Hypersensitivity to any of the components of moxifloxacin.

Moxifloxacin eye drops are allowed to use during pregnancy.

It is assumed that the use of Moxifloxacin has no side effects on the breastfed baby.

No serious ocular and systemic adverse reactions have been reported in clinical trials. The main side effect was eye irritation and pain (in 1-2% of participants in clinical trials), which was not a reason to stop treatment.